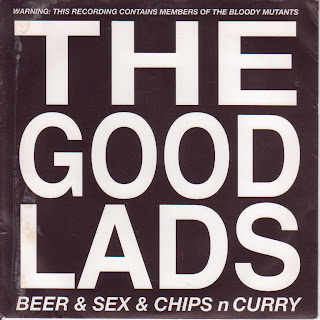 Now this is an odd one! Not really a hundred percent sure what the story was with this band, in the mid to late nineties I used to write to a guy in Wicklow called King Slug,he ran No Pride Records and I think he may have been in the Bloody Mutants too. I picked up this Macc Lads-esque pub-rock 7" off him when it came out. Never was sure if this was a band he did with some guys in the states or what the stoyr was with them at all, as its recorded in San Francisco, but fuckit cause it contains members of The Bloody Mutants and it's one of the more unusual Irish 7"s! Sory about the shit all over the cover of the record scan, got covered in beer ironically in the Milltown house :( So if anyone has anymore info or can set me straight on this band please comment!
download via mediafire
Posted by Ed 'On 45' at 19:09