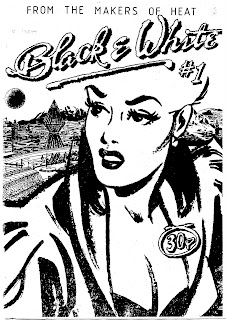 'A few months after dust had settled on the whole U2/HEAT situation in 1979, Stephen Rapid and Pete Price ( Now sans punk monicker, " Nasty " ) launched a new xerox fanzine with a different angle called BLACK & WHITE, the first issue of which appeared in November ‘79. This time they let the bands write the stuff and the editors designed the layout. This fanzine had much more of an emphasis on post punk ideals, new wave, electronic and avant-garde groups than HEAT. In Dublin, groups like the Virgin Prunes, the Modern Heirs and Tell-Tale Heart experimented with the idea of music outside a strict rock format, including electronic music, while groups like the Blades, DC Nien were taking the ideals and inspirations of punk off on a tangent. The weakness in BLACK & WHITE as a fanzine was that, while the review material showed that they were on the pulse of what was happening, the exercise of allowing bands to write their own material resulted in a magazine which read like a handful of press releases gathered together. This was in total contrast to HEAT’s opinionated humour, and strangely, even U2 got a look in, which seemed more like a charitable peace offering than anything else. BLACK & WHITE itself only ran for 3 issues, barely scraping a foothold in the ‘80’s. It seemed that its editors’ passion for underground press, not to mention their tolerance for the endless barrage of Irish indifference, had finally run out of steam, but it's content serves as an interesting snapshot of Dublin during a transitional period.' - Boz Mugabe. Thanks to Boz for sending this pdf on, while the content may be a lacking a little in this zine the layout of it is fucking spot on.