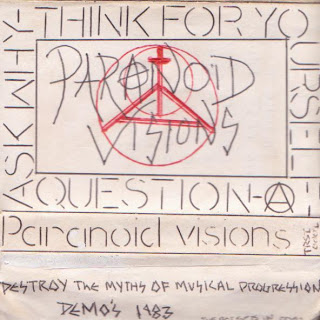 Paranoid Visions - Destroy The Myths Of Musical Progression Rehearsal Tape 1983
Dublin, 1983, The Rot Sets In, Tape
7 songs here from the 4th or 5th ever Paranoid Visions rehearsal (I am reliably informed by PA). Apparently Conscription, Vivisection and Take It Back were songs that were carried over after the change from Insane Youth to PV. Personally I love the dark, atmospheri sound of alot of this early PV stuff. Classic Dublin Punk.
download Paranoid Visions - Destory The Myths Of Musical Progression mediafire
Posted by Ed 'On 45' at 01:16