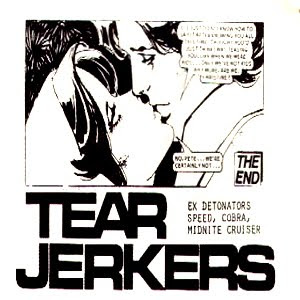 Thanks a million to Paul McIlwaine of the Tearjerkers for letting me up the following from his Grinning Soul Blog. It should be noted that The Tearjerkers retrospectively released the 'Comic Book Heroes' LP in 2008, available via itunes. Anyway the following are the words of Paul from his blog in relation to this download, "This is a rare treat for anyone who saw the Tearjerkers live especially in the first couple of years. This collection features songs recorded for Belfast's Good Vibes Label. We recorded 4 songs in Keystone Studio's in Dublin's Harcourt Street. two of these songs ended up as our first single for Good Vibes i.e. Love Affair and Bus Stop. This single was remarkable because of its stand-out cartoon gate-fold sleeve. The song Bus Stop was written by Paul & Howard and was played as part of the Detonators set back in 1977. The other songs from this session that where considered for a second release and are 'Don't Blame Me' and 'Chit Chat'. The rest of this collection are studio recordings made in Belfast around this time. These tracks where featured on local radio station both in Northern and Southern Ireland and even BBC's John Peel picked up on several of these raw recordings prior to the release of the Murder Mystery single on Phonogram."