COITUS - IN TWO MINUTES YOU'LL BE SMOKIN' IN HELL TAPE 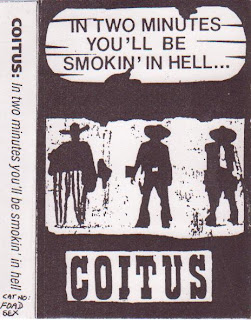 Coitus - In Two Minutes You'll Be Smokin' In Hell Tape
Dublin, 1991, FOAD, Tape
First two demos by Coitus here released by FOAD on one tape. Amazing raw discharge and amebix style punk. Now back playing gigs together and soon to have a collection of all their post 91' songs released on a double cd by Underground Movement.Taken from the Underground Movement website "Initially formed in 1989 amidst the sqautter/Punk scene of North London, the band saw several members pass through the ranks including Pete “Lippy” Lyons, formally of Antisect, Martin Tyan, later to form Screamer and Pato Duffy, now sadly passed away. The band settled on the stable line up of Skinny-Bass/vox, Alien Drums/vox, Mik Guitar/vox and embarked on a chaotic journey, which saw the band tour all over the UK, Ireland and mainland Europe, releasing several recordings along the way. Coitus finally split in 1996 but have been sporadicallyreforming since 2000 and will play a handfull of live dates to support this release."
download via mediafire
Posted by Ed 'On 45' at 22:52