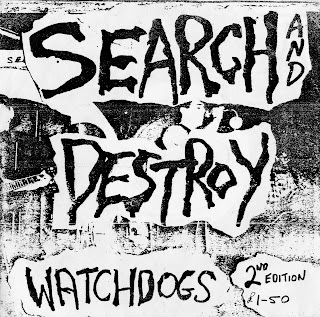 Search & Destroy - Watchdogs / Problem Child 7"
Dublin, 1987, Comet Records, 7"
Ripped and Written about by Boz 'Search & Destroy were spawned
from older Dublin Bands Ministry of Youth and Napalm Sunday,
and as their name would suggest, went for a more garage-y punk
sound. Their one single Watchdogs / Problem Child was released in
1987 by Comet Records. The A side was a studio recording and the
B side was recorded live in JJ's on Aungier Street - see attached flyer
( during a gig with Paranoid Visions - who also released live
recordings from the same day on the flipside of a number of EP's ).
This was supposed to be followed by an album called BLOOD FROM
A STONE, probably also for Comet but this never transpired. One
further track MY LIFE surfaced on a comet cassette
compilation in 1988.'
download via mediafire
Posted by Ed 'On 45' at 20:49