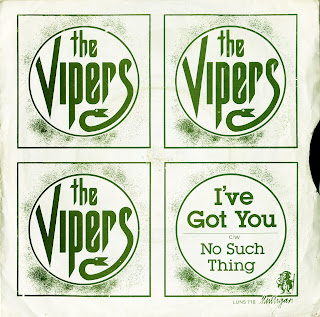 Another excellent one from Boz! 'The Vipers were a band formed in Dublin in 1977 directly in the wake of the Boomtown Rats and The Radiators from Space. One of the 4 piece's first gigs was the Radiators organised 5 band punk festival at UCD along with The Undertones, Revolver & The Gamblers. After initial line-up shuffles, The band's intensive rehearsals paid off with an ever increasing local following and a deal for a single with Mulligan Records. By the end of 1978 they had released their excellent single I've Got You / No Such Thing, which remains a gem of naive 70's pop punk, & provided English tour support for lablemates the Boomtown Rats along with Several dates in Ireland supporting the Jam ( Paul Weller was also a fan ).

From Hot Press late '78 " Probably making more prestigious strides than any other local band in 1978, The Vipers - boasting a new improved, streamlined line-up - Finally look set to fulfill the potential which they've displayed - If erratically - in the past. A fine single on Mulligan and a successful British tour supporting the Rats will have garnered for them the much needed experience and attendant confidence. The likelihood is that '79 will bear witness to more important and far reaching developments "

By 1979, they had, like many other bands absconded to London to seek fame and fortune, recording a peel session & demos for Virgin records. Later in the year toured with Thin Lizzy ( Philo had also extended a similar helping hand to The Rats, the Radiators and Protex ) as well as playing their own UK gigs, but the all important album deal fell through and by 1980 the band had split and returned to Dublin. One other track, TAKE ME appeared on a 7" EP called ROOM TO MOVE ( along with the Outcasts, Shock Treatment and Big Self - EG records 1980 )'
download via mediafire
Posted by Ed 'On 45' at 23:00