PARANOID VISIONS - DESTROY THE MYTHS/BLOOD IN THE SNOW TAPE 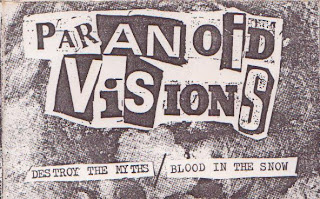 Finally got these upped today. The first two Paranoid Visions demos which were subsequently re-released on the infamous Bluurg Records. What can be said about Paranoid Visions that hasn't been said already. Paranoid Visions are one incredibly prolific band the amount of different releases I still have to rip testifies to this! This early PV stuff has an incredibly dark, depressed, nihilistic sound to it. It's a brooding soundtrack to a cold grey city, with Deko's lyrics uncovering and damning the true nature and underbelly of Irish society. Enjoy! Apoligies but I had to put up two download links for this one due to it's size.
download Destroy The Myths via mediafire