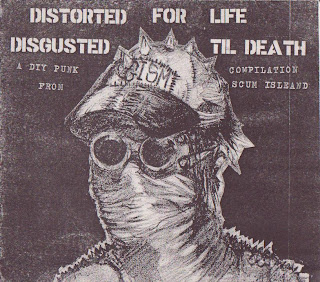 The tagline for this cd is 'A DIY punk compilation from Scum Island', that kinda says it all. This excellent comp put out by Eric (Easpa Measa/Two Headed Dog/Cotton Fist Zine etc) about 2 years ago features some of the best crust/d-beat that has come out of Ireland over the past 5 years. This cd came free with an issue of 'Two Headed Dog' fanzine and I'm unsure if Eric is still selling these however knowing the sound lad that he is I'm sure he'll be glad to see it online. So there are two or three numbers here from the following Still Birth (Belfast), Carosah (Dublin/Wicklow), Putrefaction (Dublin) and Divisions Ruin (Wicklow). The cd and inlay are beautifully put together and are a credit to the saying that 'DIY is not an excuse' for shoddy substandard releases.

download VA Distorted For Life, Disgusted Til Death via mediafire 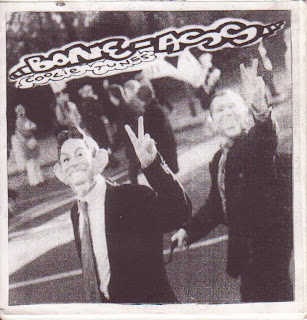 The second of these diy compilations that came out at the height of the deadly Kilcoole gig madness. Maybe it was seeing Kidd Blunt play their last ever gig last week that has made me nostalgic for so much that has come out of the village also known as Glenroe. This compilation is truly unusual, the first few tracks being straight ahead numbers from No Compliance, Scared Shitless, Kidd Blunt, Foot In Mouth & Old Man Eoin and the second half being a rake of various tunes ranging from hip-hop to dub, the outstanding track being 'Scummer's Blues' by Luke's Duke!
download VA Bone Ass Coolie Tunes via mediafire
Posted by Ed 'On 45' at 20:26 1 comments 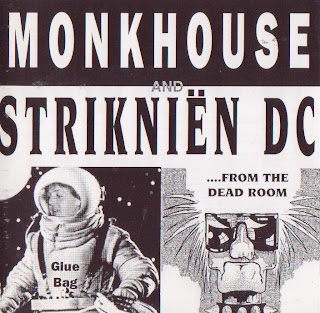 About time I got this one up here! I can't really stress enough how excellent this release is, possibly the best to ever come out on Rejected in my humble opinion. I could rant on for ages about how getting this cd around 96/97 pretty much exposed me to the fact that there even was an Irish punk scene. Monkhouse were one of the more prolific of 90's Northern Irish bands with a variety of releases on various labels, songs with incredibly heartfelt lyrics about isolation, alienation and dissatisfaction, I'm just pissed I never got to see them live. Striknien D.C. pretty much are/were 'dublin punk' personified and these tunes I feel really were their strongest, don't think I could ever listen to 'Drugs Crisis' without it raising a smile.
download Monkhouse/Striknien SplitCD via mediafire
Posted by Ed 'On 45' at 20:12 2 comments 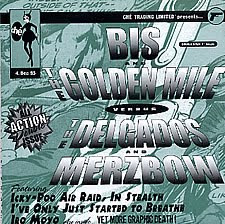 The blog is back! Haven't been able to post over the past while, moving house is one hell of a pain in the bollox and left me with boxes and boxes of stuff to rip! :) Anyway thanks to Martin (check out the Swedish Nurse blog here) for sending on this discography of the excellent Golden Mile from Belfast. This band started in the early nineties and garnered a strong reputation both in Ireland and across the water in England. The Golden Mile featured some of (in my opinion) of the strongest vocals on an Irish release ever which grow in intensity and edginess with the music. There is something about their sound that reminds me of bands like Moss Icon, brilliant stuff altogether. The songs on this discog are in reverse chronological order and are as follows.
Track 1: On Che Records com 2x7" w/ merzbow, The Delgados, Bis (Recorded Aug '95)
Tracks 2-5: 'Blowing Hot and Gold' 7" EP (the song 'Answers' was not on the EP, Recorded Jul '94)
Tracks 6-10 Demo, September '93
Tracks 11-17 Demo, June '93
18-20 Filler!
download The Golden Mile Discography mediafire
Posted by Ed 'On 45' at 19:12 1 comments