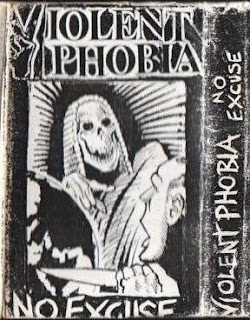 Violent Phobia - No Excuse Demo
Cork, 1989, Tape, DIY
Crusty Anarcho Punk sent in by Sean "The sound quality of this demo is shite. Someone in a Manchester squat pissed on a box of cassette tapes. This is the result of a piss stained tape! Didn't bother ripping a few songs where singer Tammy is talking from a Church Altar or interviews with people around Cork at the time about anarchy, animal rights etc. Which were all cut inbetween the songs originally. Side b of this demo was a live gig Ian who designed the cover died from head injuries in May 2008. Rest in peace "

VIOLENT PHOBIA - No excuse by diyirishhcpunkarchive
Posted by Ed 'On 45' at 17:26