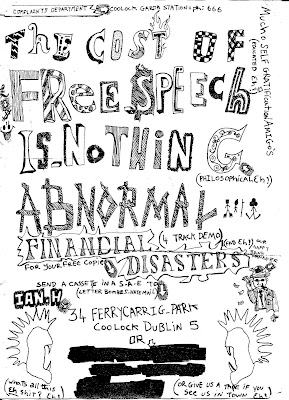 Dublin, 1984, DIY, Tape
Thanks a million to Pat (drummer) for sending on this four track demo of the mighty Abnormal. These four tracks of uptempo punk rock were recorded in September 1984 and released as a demo tape, the song 'Tribal War' is a stand out track and I guess quite topical for the time considering what I know about the punk scene in Ireland in the early 80's. I love unearthing stuff like this, that is what the blog is all about. Keep on sending stuff on to me people :)

download Abnormal Financial Disasters Demo via mediafire
Posted by Ed 'On 45' at 14:14