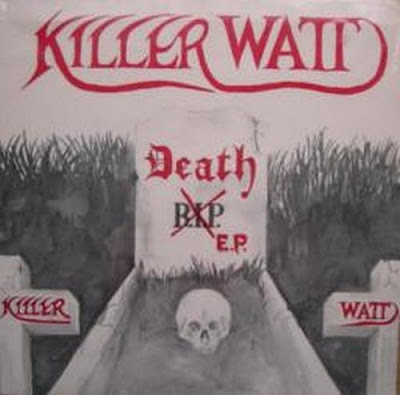 Killer Watt - Death E.P.
Dublin, 1987, DIY?, 7"
Thrash/Speed Metal from Dublin, thanks to Ratzy for sending this on, taken from the myspace...'Killer Watt were a Speed/Thrash Metal Band From Dublin Ireland. The band was started I think back in 1985 by drummer Steve and bassist Sid who recruited Marcus burns on guitar but in '86 Marcus decided to leave. We rehearsed in the old Temple Lane Studios in Temple Bar Dublin. In 1987 we recorded a 3 track EP which was inspired by The Nightmare on Elm St. movies, the EP also got into the Irish Top 30 chart at the time. After that we went on to proudly play in and get barred from nearly every dump around Dublin and Ireland including wait for it...a tour with Irish heavy rock band Mama's Boys (?? god only knows who had that brainwave) but thankfully we got thrown off the tour after only two dates due to the drunken rabble that turned up each night to see us! Soon after that we decided to add a second guitarist so Derek Sweeney joined, finally that year we appeared on the Irish TV Music Show Mega Mix doing a cover version of the Sex Pistols track Pretty Vacant. In 1988 after on-going disagreements the band decided to split. It was a great and crazy three years and thanx to all who bought the EP and came to the gigs.' http://www.myspace.com/killerwattdublin