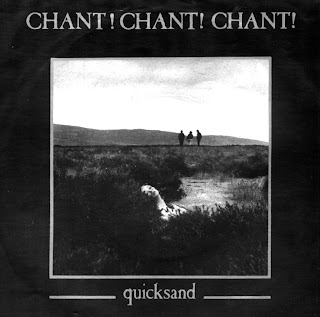 Chant Chant Chant - Quicksand / Play Safe 7"
Dublin, 1981, Peig The Man, 7inch
Chant Chant Chant meanwhile developed a quirky and striking sound, reminiscent in places of The Birthday Party and Gang Of Four, punctuated prominently by Larry Murphy's unique bass playing. Part of the rhythm heavy feel was due to the fact that guitarist Robbie Wogan worked in England during weekdays and returned to Dublin to gig and practice at weekends, filling guitar parts into previously worked material!! The band gigged regularly and played several high profile supports ( The Fall in Cork & the infamous 4 BE 2's charade in the Trinity JCR amongst them ) making their first vinyl appearance with a track called "What Do You Know" on the Boddis EP, side by side with the peridots, Big Self and The Departure. This was followed in 1981 by their only other recorded work, the excellent Quicksand / Play Safe 7" on their own Peig The Man label. 500 copies were pressed. The band dissolved in 1982. Paul Monahan currently records electronics under the moniker M101 (here).
VOX fanzine issue 7 - review of the Chant Chant Chant single -
" Confident and upfront drumming , driving bass and scratchy but accessible guitar dominates this, their first single. The vocals in places sound a little like Andy Partridge. It was recorded in November 1980 but judging by the recent session they did for RTE they certainly have progressed. This is one of the better Irish singles for a while "
download via mediafire
Posted by Ed 'On 45' at 02:46