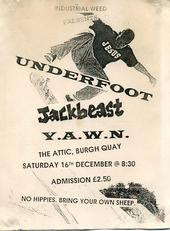 "Underfoot formed in the summer of 1995.Played with nofx when they were good.Nofx that is,not underfoot.First band since Paranoid Visions to be barred from the Attic.That’s what the landlord told them anyway.Took a planned 6 month break in the summer of 96 and it’s more or less still a break.So never really split up I suppose!!!Members went on to be in bands such as Death Race,Sir Killalot,Holemasters and most recently Razortown". Thanks a million to Liamo for sending this one on.
download via mediafire
Posted by Ed 'On 45' at 17:15