THE THREAT - "HIGH COST OF LIVING / LULLABY IN C 7inch 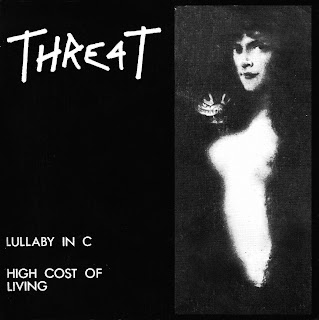 The next three 7" have all been kindly sent along by Boz (without whom this blog wouldn't be half as good.) and as he says himself it's a good way of tracing the first progression of the Dublin Punk Underground way back when. The descriptions for the next 3 7"'s are by Boz,

"The Threat ('78-'81) was one of the first authentic local post-punk
bands that didn't have bar rock roots or power pop aspirations.
Their name is synonymous with the Dandelion market and crops
up as a footnote in much ofU2's folklore of the era. Their one
single, High Cost of Living / Lullaby In C commanded a brooding
PIL/Wire tone and a tribal fan base, casting an influence on many
subsequent bands from My Bloody Valentine to Napalm Sunday
to Paranoid Visions ( who resurrected and reworked HIGH COST
OF LIVING recently ). 2000 copies were pressed. The story of
The Threat was covered in detail in a feature that was originally
published in RIOT 77 magazine a couple of years back - the same
article can be found here...

The original line-up of core member Maurice Foley, bassist Larry
Murphy and drummer Paul Monahan ground to a halt after 2 gigs
when violence marred a trip to Dundalk. Murphy and Monahan
departed to form Chant Chant Chant ('80-'82) and The Threat
continued with bassist Deirdre Creed from the Boyscoutz
( Ireland's first all girl punk band ) and a drummer called Longer
( replaced by Ken Mahon from DC Nein for the recording of the
single ), and notably, the addition of Stano on synth which
broadened their possibilities significantly."