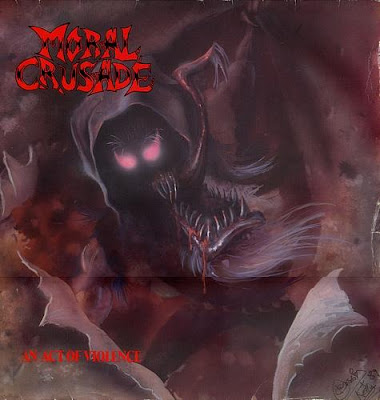 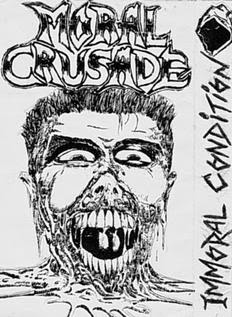 Moral Crusade - Immoral Condition Demo & 3 Tracks from 'An Act Of Violence' LP
Dublin, 1988-90, DIY, Tape & LP
Classic Dublin Thrash, the first three tracks are from the 1990 'An Act Of Violence' Lp and the rest are from the 1988 'Immoral Condition Demo', excellent stuff sent on by Ratzy, thanks. From the myspace..'MORAL CRUSADE were a Thrash Band from Dublin Ireland formed in 1988. The line up was Pincher -Vocals, Ratzy -Guitar, Mano -Bass, Joe -Drums, Trev -Bass. In '88 we recorded our 1st Demo entitled 'Immoral Condition' shortly after that our Bass player at the time Trev decided to leave the band due to musical differences(he was musical and we were different) So Mano a good friend from our Chromatic Death days took over on Bass and we spent the next months gigging. In late '89 we recorded our 1st and only full length 9 track LP entitled 'An Act Of Violence'. Finally in 1991 after disasterous management, promotion and distribution of the LP the band tired from endless gigging decided to take a break (a long one at that!) but unfortunetly never got back together. Over the years the band has reformed in one shape or another and jammed a few times but due to work and other stupid shit it never really got going again.' www.myspace.com/moralcrusadehcthrash