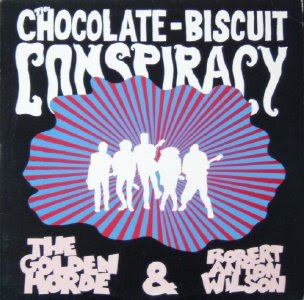 The Golden Horde - The Chocolate-Biscuit Conspiracy LP
Dublin, 1985, Hotwire Records, LP
Now this is an unusual one! Had to have a think about whether I should this up here or not, due to the fact that it was recorded on larger independent label but then I noted that the Lp is linked off Robert Anton Wilson's webpage (more on that in a second) so I may as well put it up here too. The Golden Horde were an infamous Dublin band that started up in 1982, emerging from the garage scene, with a dark and hypnotic sound. This album was a collaboration with eminent author, scientist and conspiracy theorist Robert Anton Wilson, who supplied both vocals and lyrics. Really worth a download, and go to IrishRock.Org to learn more about the Golden Horde.