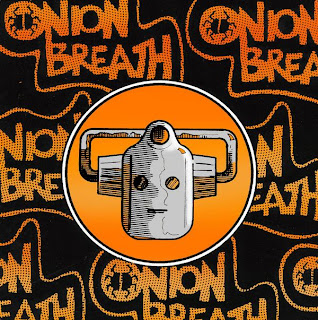 More from Onionbreath bio..."Onionbreath was never a fast band, nor one that was ever going to moderate itself within the trappings of an orthodox punk sound. The album length CYBERMAN VIBRATIONS ('93) consisted of a handful of experimental bedroom recordings as well as songs that were an integral part of the live set. At this point the techincal aspects had improved slightly... Brian from Ogre had acquired a 12 track desk with 9 tracks actually working on it, formerly belonging to the Radiators! Running 2 channels into this from the 4 track for stereo meant we had 9 to work with before we needed to start bouncing tracks... this way we were able to record the basics live in our drummer's bedroom and add tracks (hide our mistakes?) later..... The various bedroom recordings were added in and sequenced on a "master" before we hit the twin tape decks again, and the "unlegendary" sunburst cyberman covers (our answer to all the rave graphics at the time) were moonlighted during a FAS course. This cassette got some very positive reviews on it's release and sold well, although in hindsight, this was Dublin in '93 and independent music was still in nappies, so there was definitely more empathy with zero budget operations.
Towards the end of 1993 there were plans laid for a 7" single to be released in the summer of 1994 (we even got as far as making the plates for the sleeve), but as we all meandered off in our own direction, the last official business of Onionbreath was a gig in Fusion on O'Connell Street with Flexihead (this may very well have been their last gig too???).
Time has blurred much of that era but some fond memories include rehearsing in the drummer's shed and standing in the snow outside playing bass because there was so little room. Bullshitting a member of Ogre that State Of Shock by the Ex was our new demo was a moment definitely worth a mention, and of course the proudest moment live would have to be supporting the Spermbirds when they rolled through Dublin all those years ago. Then there were the many multi-bills upstairs in the Fox & Pheasant where 6-7 bands would use the same gear, sometimes right down to straps and plectrums, which would inevitably end with that long forgotten rite of passage - running for the last bus with a drum kit!!!
While we were merely one of many who learned their chops around this time and went onwards and upwards with other ventures, the determination to contribute to underground culture in the city (without maybe ever fully integrating into it) and the resolution to beat general tedium with something constructive was the driving force behind the brief lifetime of Onionbreath." Thanks Boz
download via mediafire
Posted by Ed 'On 45' at 21:09