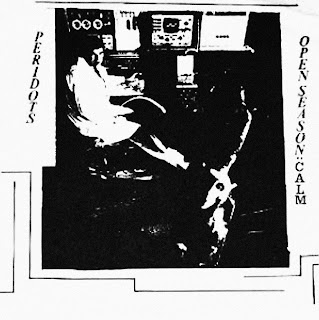 Peridots - Open Season / Calm 7" + 2 Bonus Tracks
Dublin, 1981, Optional Goods, 7"
This is one absolute cracker sent on to me by Boz, amazing dark, atmospheric post-punk, been listening to this constantly all week and I honestly think this band could've been fucking huge. More from Boz here, "An very interesting first generation post-punk band, the Roots of the peridots lie in Steve Rapid's decision to leave the Radiators and remain in Dublin in 1977. Together with Pete Hamilton they formed a band called the Modernaires, experimenting with the possibilities of newly available and affordable Wasp synths. With the addition of Stan Erraught ( later of Stars Of Heaven and The Great Western Squares ), and the departure of Rapid, the stable duo renamed themselves The peridots and released their only single Calm/Open Season in 1981. Previous to this they had been included on the Boddis 7" EP (1980) which celebrated a run of gigs at the Magnet on Pearse Street and also featured Big Self, Chant Chant Chant and The Departure. Pat Larkin of the Blades briefly played drums before they split i n 1982.There are 4 tracks included here - The two off the 7", the unissued track "So Many Angels" and the Boddis EP track "Precious Blood". "
download via mediafire
Posted by Ed 'On 45' at 22:36