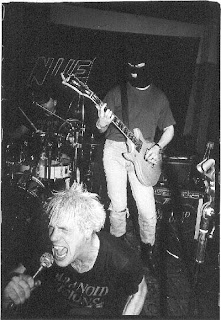 PARANOID VISIONS - DEMOS AND RARITIES
Dublin, 1982-2009!, Various
Thanks a million to PA for sending me on these gems. First up is a demo of 'Creeping' off the recent 'Beware of The God' LP which is a cracking anthem. Following this is a 1996 version of the PV classic 'I Will Wallow' with Dolores O Riordan of the Cranberries being the focus of Deko's spite this time around. Next up is 7 songs from a 1982 demo, this is pretty unsual stuff from the PV I know, coming on like a more fucked up PIL with a Killing Joke influence this stuff is truly menancing. To finish up are two otutakes from The Robot Is Running Amok EP Sessions. Anyway download this gold and check out what PV are at here. That is where I nicked the image from which is circa 1990.
download via mediafire
Posted by Ed 'On 45' at 21:14